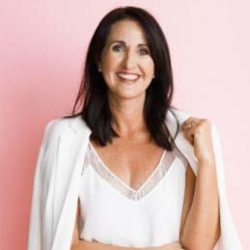 Rochelle is Share the Dignity’s founder and Managing Director, though the title she is most proud of though is ‘Pad Lady’. Rochelle has led a team of volunteers collecting over 3 million period products across Australia.

In March 2015, Rochelle took matters into her own hands collecting sanitary items with her local community and distributing them to local shelters. As a result, a simple idea of giving dignity to women, Share the Dignity was created and has grown to a national charity. Consequently, it has over 5,000 volunteers Australia-wide, and most noteworthy provides multiple initiatives aimed at giving dignity to women.

When Rochelle first learned of homeless women going without basic sanitary items during their menstrual cycle, she decided the question was not, “why is no one doing anything” but rather, “what’s stopping me from doing something?”

Rochelle’s life is, in many ways, the story of every woman. The ups, the downs, and everything in between has forged a woman who knows what it means to hold her head high. But this was not how her life started, and some of her earliest memories are of keeping her head down.

“The trajectory of domestic violence in my own family is not much different to the stories we hear every day from the girls and women we support at Share The Dignity. I was lucky to have a brave mother who fled a violent relationship three months after I was born. But as we know, patterns like this tend to re-emerge. One brave act is often not enough to turn your life around, but it is an important beginning.”

There were more hurdles to come throughout Rochelle’s childhood and early adult years. She experienced further instances of abuse, and that horrid sense of disempowerment that makes you question your identity and your self-worth.

“I only truly discovered the strength to change this pattern when I became a mother to two beautiful girls. As women we slip into the traps of putting other people’s needs first, thinking we’re responsible for bad things that happen to us, trusting people when our instincts warn us to be wary and staying silent about things that are better shared” Rochelle said.

But Rochelle had darker days yet to come. Nearly ten years ago, as a single working mother determined to support her daughters and maintain her independence, she made a deeply regrettable business mistake. It was one that would change the trajectory of a life that she felt had just started to look up. This serious error of judgment is something that she has never denied, and it has always been a matter of public record.

Pleading guilty to fraud, selling her family home to make restitution, and serving six months of a three-year sentence in a women’s prison was the punishment from the courts.

“I was naive but that’s no excuse, I made poor choices and I own that. Like all stories, what is on public record reveals only a glimpse of what happened,” but Rochelle says she made peace with it many years ago and re-hashing the story to satisfy other people’s curiosity serves no purpose.

Her first five days in the Brisbane City lockup were terrifying. As a mother, it was initially the anguish of being separated from her two young children that hit hardest. “I had no voice, I had no idea who I was; I was broken.

“But to be absorbed in my own private hell, and then look up and see another woman going through something so much deeper, really snaps you out of it.

“In many ways, being amongst these women was my redemption. Before this experience, I admit I was often too quick to judge. But after six months of witnessing the stories of other women in prison I realised that people are fundamentally good, however, they can make bad choices when they are faced with traumatic circumstances.

“When women support women it feels like nothing can hold us back.
We may be weak, but we are also strong. We are vulnerable, but we are also invincible.
We know fear, but in its face, we can be brave.
We too often remain silent, but when we find our voice we can change the world.”

I had to make a choice to either let one act define me or to use the experience to redefine myself. With the support of those who cared about me, I came to realise I am a good person, and I have found within myself the confidence to now respond to circumstances with my head held high.”

The school of hard knocks is a powerful teacher. Its lessons can either close your heart or open it up. Lucky for all of us that Rochelle returned to her life with a heart full of compassion and determination.

Back with her children and with new strength and resilience, Rochelle rebuilt a life of which she can be proud. She set up her own personal training business and became involved in causes dedicated to helping women in need.

In 2015 Rochelle read an article on MamaMia revealing the difficulty that homeless women faced in managing their periods. She, like many other women, asked herself “Why has this never occurred to me before?” And as women do, she did something about it, putting out the call for personal items to donate to centres that distributed them to women in need.

What started as a one-time response to a local need, became a lightning rod for other women. “I just think this was an issue whose time had come. Every woman has had an experience with their period that they wouldn’t wish on another. As the news of period poverty spread, and people realised that small dignities can make such a big difference, the number of Sheroes and Heroes has swelled.”

It’s been a tumultuous ride and like all remarkable women, Rochelle has been holding on by the seat of her pants!

The one thing that Rochelle already knew how to do well was to lead. Whether by instinct or by experience, she knows how to surround herself with great people.

“Share The Dignity has always been a band of women (and supportive men) who just want to help others. I didn’t know what I was in for the first couple of years, but I did know that I was determined not to miss any opportunity to be there for those girls and women who needed our help.

“I had to learn about registering and running a charity and bringing on amazing sponsors who share the vision. I had to learn about setting up a Board, and we’re so lucky that this cause has attracted committed and highly qualified people to govern our charity.”

As the profile of Share The Dignity grows, so too does Rochelle’s. While the expectation to share her own story was probably inevitable, she says the reason she has avoided doing so.

“Share The Dignity is not about me. I’m just a person who acted on something close to my own heart, and the hearts of others opened too. These Sheroes & Heroes are the true face of Share The Dignity” Rochelle said.

“I want to focus my energy on their amazing work. Their stories are the ones that matter and their acts of kindness are the moments that change the world.”

But her public profile plays an important part in maintaining the momentum of change that Share The Dignity, and other groups who shed a light on the often-hidden needs of women, are bringing about. As many have learned before her, a public profile is a double-edged sword.

“People are overwhelmingly supportive and encouraging. Most people know that life is a journey and that along the way we all have our dark times. I know there will continue to be people who judge me for the actions of my past and refuse to see the person I am today. I can’t control that, and it does hurt.

“But even when I am trembling inside, I work hard to remain present with this important work, I climb up on stage to share our message, and I hold my head high.”

Listen to the podcast