Ending the shame and stigma

At Share the Dignity, we know that without ending the shame and stigma that clouds periods, we cannot end period poverty. We work hard each year to not only distribute products but to advocate for change, work with researches to explore the issues people experiencing period poverty face, and to educate people on the realities of period poverty.

Something we're extremely proud of is ending the unfair tampon tax.

We axed the tampon tax

After nearly two decades of campaigning, state and federal governments finally agreed to abolish the $30 million a year tax on tampons and sanitary products after Share the Dignity's Founder, Rochelle Courtenay, decided to lobby for real parliamentary change. Women have roared to have their voices heard and every year petitions were set up as they called for an end to this tax. But this time the roar was louder and finally, the voices of Australian's were heard.

How did Share the Dignity help to effect this change? For Share the Dignity the message was clear - it’s time to stop taxing the dignity of Australian's. Rochelle felt the need to take a different approach leading a grassroots campaign and standing on the shoulders that had protested for years before. We utilised the resources and expertise of the University of Queensland law students who worked on every aspect of how any other countries had worked on removing this tax and what Australian women could do if our government continued to refuse to remove this tax.

In January 2018, Rochelle asked the then Prime Minister Malcolm Turnbull at a ‘Politics at the Pub’ local event if he thought it was fair that our period products were taxed. He responded that he had heard no noise
from any of the states around this. Rochelle thought 'we'll show you noise!' At Share the Dignity, we put the call out for people to help us and we set up an online Federal Petition spearheading the #axethetaxperiod hashtag and used our community engagement voices nationally to lobby for equality through social media resulting in a petition with in excess of 104,000 signatures. 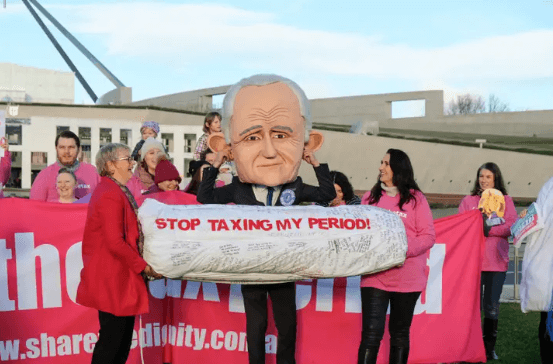 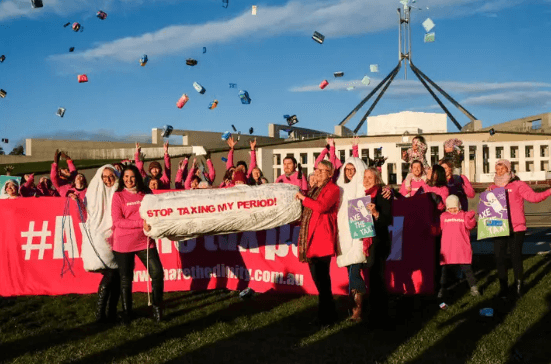 Across the nation, people jumped on board for this massive final push towards equality. We also asked people to roar as loud as they could and contact their local and federal politicians.

First and foremost, the Greens were on board and when Rochelle asked the same question to Bill Shorten, his response was that the Labor party would remove the tax if elected. On Sunday 29th April the Labor Party
officially announced that, if elected, they would end “Australia’s unfair and discriminatory “tampon tax”, partnering with the states and territories to remove the GST on period products”.

In the announcement, Labor provided an option for how the lost GST could be recovered ensuring that states and territories do not have their current revenue stream reduced. A call with then Liberal’s Health Minister Greg Hunt was the tipping point in the discussions for the removal of the tax and to get all parties on board. A rally in June 2018 was held outside Parliament House in Canberra when Greens Senator Janet Rice presented the petitions and the bill was passed on voices. Rice’s bill proposed to amend the GST and change the classification of tampons, pads, liners, cups, and sponges – which were currently listed as non-essential “luxury” items – to essential health products.

On October 3, 2018, the fight was finally over. The bill was successful and the tax was abolished by state and federal governments. The ‘tampon tax’ was officially removed as of 1 January 2019. Sadly, with period poverty on the rise and despite this win, Share the Dignity’s work must continue to ensure that everyone is afforded the dignity in life that so many of us take for granted.